nicole is having the best weekend ever 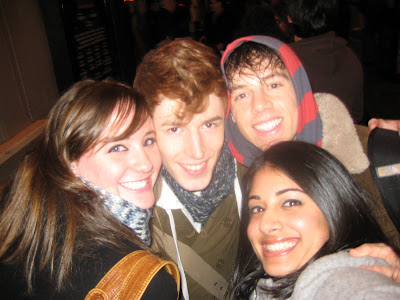 i had the best weekend ever.

SA on thursday was amazing as always but especially so because we sat on the stage. although it was my third time on the stage, it was reen's first so that was fun.

on friday i slept all day because i was exhausted from waking up at 4:30 to student rush on thursday.

on saturday i went into the city again without any real plans. i ended up at New World Stages and bought a ticket to Altar Boyz.

so i went to starbucks an hour before the show just to get coffee and whatnot. well i bumped into blake bashoff and eryn murman who were in line directly behind me. i pulled it together and we chatted for a bit. then i was waiting for the bathroom and blake daniel came out. WHAT are the chances of that encounter?? and i had just seen the show so blake remembered me. unreallllllll.......

Altar Boyz was HILARIOUS. better than i thought and i had high expectations. v. high energy just watching them made me tired - and it was their second show of the day!

then, i bumped into jimmy fallon on 8th ave! (literally i nudged him with my umbrella). i was surprised at how tall and good looking he was. i muttered an "ohmygodhi" ...which he returned (minus the ohmygod) and that was that. i couldn't believe my luck - 3 SA cast members and jimmy fallon all in one night. but it would have been a great weekend even without that. something about being in the city just wakes me up. i love walking around, aimlessly, by myself even. i just feel so alive. it's hard to put into words.

....
the past few days have been dreary and cold. it's nice out today which is relieving. it makes me want to go to the city so bad though. ughhh.
Posted by Nicole at Thursday, February 14, 2008 No comments:

today, i decided to skip my 2 classes and go into the city.
it's free transit week and thus i feel absolutely justified on skipping class just to walk around the city for a couple hours.

i teased myself by walking wide-eyed around the theater district.

then i took a train back to go to my voice lessons in the brunz. they are going well although i feel like a fish out of water because i have NEVER had classical training...and i feel like my past training even negates some of the techniques i'm studying now. the more i learn the more overwhelmed i get. that makes no sense but it's true.

i've been listening and learning The Last Five Years and Parade over the past week or so. i officially LOVE Jason Robert Brown.

tomorrow, i skip my 3 classes and student rush spring awakening so reene & i can go to the evening show. v, exciting.

so i only had 2 days of class this week. excellent. it's officially the weekend.
Posted by Nicole at Wednesday, February 06, 2008 No comments: